We’ve been hearing about jackfruit for quite some time in the Shop as we regularly had customers asking if we had it, we hadn’t, none of our suppliers carried it! Our Indian chef Surinder knew all about it though, it’s been grown and eaten in India for a long time. 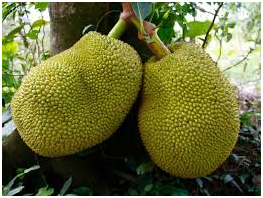 So what is it? The jackfruit (Artocarpus heterophyllus), also known as jack tree is a species of tree in the fig mulberry and breadfruit family (Moraceae) according to the font of knowledge that is Wikipedia. The jackfruit tree is well suited to tropical lowlands, and its fruit is the largest tree-borne fruit, reaching as much as 35 kg in weight, 90 cm in length, and 50 cm in diameter. The jackfruit tree can produce about 100 to 200 fruits in a year. The jackfruit is a multiple fruit, composed of hundreds to thousands of individual flowers, and it is the fleshy petals that are eaten.

The jackfruit tree is a widely cultivated and popular food item throughout the tropical regions of the world. Did you know that Jackfruit is the national fruit of Bangladesh?

Eaten ripe the flesh of the jackfruit is starchy and fibrous and is a source of dietary fiber. The flavour is comparable to a combination of apple, pineapple, mango, and banana.[Varieties are distinguished according to characteristics of the fruit's flesh.

Eaten unripe or young though, the flesh can be used in all sorts of dishes such as curries, stews, biriyanis or as a side vegetable. It comes into it’s own when used to make “pulled” dishes, the fibres have a meaty texture and the ability to take on any flavour combinations you can come up with. We especially like it delicately spiced biriyanis or barbecue style “pulled pork” sandwiches with lots of tangy flavours and a kick of chilli! 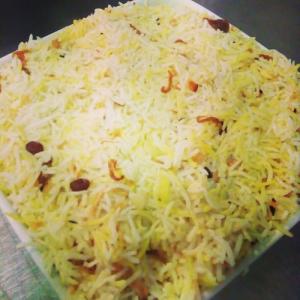 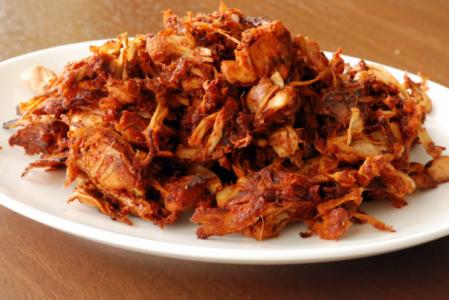 The great news is that we’ve finally found a supplier in Manchester and so now you’ll be able to create your own jackfruit dishes at home for only £1.27 for a 556g can!

Want to work in our co-op? Take a look here to find out the latest news on vacancies and how to apply to work at Eighth Day.

Looking for your one-stop shop for vegetarian produce? Then look no further, we stock over 5,000 vegetarian and vegan products as well as lots of organic and fairly traded produce.

In our fully licensed, 100% vegetarian Café we prepare and serve our wholesome and exciting food in-house all day. Including cooked breakfasts; hot food including our famous dahls, stews and mains; our freshly made salad bar and vegan cakes and hot drinks.