As the Sixties rushed to a psychedelic close with a blaze of love and chemicals heralding the dawn of a New Age, a right-on group of friends had their stab at creating a new order. They wanted to establish a way of trading goods that broke away from the ideas of money commerce and to that end founded On The Eighth Day. Located above a boutique on the now demolished New Brown Street in Manchester City Centre, it opened as a craft exchange and alternative centre. “On the seventh day God rested, on the eighth day He (She or It) created something better” was the idea of the moment at 11pm, September 11th 1970. It was a great place to tune in and drop out, but as an attempt to escape the clutches of capitalism it was less successful and in order to survive soon had to become a shop in the more conventional sense. The involvement with the community did not die however and the charity Lifeline was founded as a result of a collaboration with On The Eighth Day, the Bishop of Middleton and Dr. Eugenie Cheesmond. 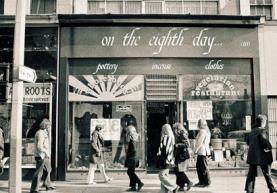 The business was going through a tough time and when the boutique burnt down it certainly brought things to a halt. This crisis seemed to redirect the energies of the partners; the insurance money certainly did, and in 1972 8th Day re-opened at 111 Oxford Road, in the heart of the student quarter. Once established, here we stayed until October 2001, changing from a clothes shop to a wholefood shop with clothes, as the workers’ interests in a vegetarian wholefood diet grew. A corner of the shop became a vegetarian café which eventually moved next door into 109, and in 1994 into 107 as well. During the first six years the business was run as a co-operative but was in fact legally a partnership. In 1976 On the Eighth Day Co-operative Limited registered as a workers’ co-operative under the Provident Societies Act.

By the nineties the building was literally falling apart and Tim, our secretary-come-builder, in agreement with the membership at the time, decided the old place would have to come down. It was not a decision that was taken lightly, involving a hefty bank loan, loan stock from loyal customers and signing a deal with a developer. In October 2001 we left our Oxford Road site to move forty yards away to temporary premises on a corner of the Sugden Sports Centre car park. We settled in well to our temporary home; the shop was even better than before and the café had a retro-staff-canteen feel to it. We hope you didn’t miss your chance to experience something of the 70s 8th Day Café ambience: close-quarter seating and the opportunity to bump knees with new faces over a veggie stew! 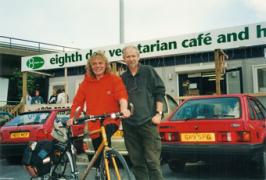 A new chapter began with the move back to our Oxford Road site at the end of June 2003 (a year later than planned) with the shop taking over the whole of the ground floor, and the café having the spacious basement with a hundred covers. Although the rebuild was extremely stressful for all those involved, it was worth it. The business had gone from strength to strength, with  sales doubling in the yearsafter the move leading to better pay and conditions for members and the ability to take create more jobs. The shop developed into an ethical vegetarian grocery with nutritionists, natural beauty experts, foodies and wine buffs on hand to share their knowledge with a widening customer base.

The business has continued to show strong growth and has really settled into the building. We’ve constantly looked for ways to keep our business fresh and exciting for our customers and expanded departments to meet customer's requirements. We’ve also expanded our work force, which is something we’re proud of as we offer minimum wages that exceed the recommendations set out by the Living Wage Foundations. We’re currently planning an exciting redevelopment of the exterior of our ground floor shop and a re-design of the basement café.

Take a look here at the events and people who have helped shape our business over the past 46 years.

What are co-operatives?  There are many types. You can find out more about the wider co-operative movement and how they differ from conventional businesses.

We are the 8th Day Co-operative, a vegetarian Cafe and Shop and one of Manchester’s longest running Worker’s Co-operatives.  Find out more about us here.